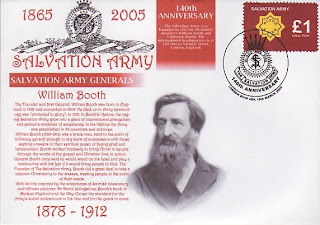 Here we go again, yet another attempt to deceive the SA philatelist. This one is so blatant I just cannot believe that it would deceive anyone! It appears, yet again, to emanate from Australia and has probably never even seen the UK, let alone a post office. There are a number of these covers around, differing only by which General is depicted, ranging from William Booth to John Larsson. I found them all on Ebay being sold as genuine commemorative covers. Let’s look at the different elements of the cover.

The cachet
Printing quality is very poor suggesting that it was probably printed on a cheap inkjet printer or something similar. The way the elements of the cachet are overlapped causing fade out and blur says little for the graphic ability of the producer.

The “stamp”
Should really read label. This was not authorized by the Royal Mail, and it is illegal to produce privately stamps which purport to be for postage. This label definitely falls into that category as it is inscribed ”LOCAL POST”, a term never used by Royal Mail. Printing quality is again poor.

The “postmark”
The postmark was not produced or authorized by Royal Mail. It was probably copied from another cover with the date etc. being changed by the use of PC software. I also have severe doubts that the postmark was even applied by normal means as it appears to have been printed on an inkjet printer. Royal Mail will not postmark commemorative covers that do not bear the correct postage rate; therefore the postmark on this cover is most definitely a fake.

I can only assume that covers such as these are produced by those who will try anything for a buck! Let me tell them that this is dishonest at best and a crime at worst. For goodness sake, stop producing this rubbish, and above all stop deceiving honest collectors. To my fellow collectors, please do not buy this trash. The more that these producers sell the more they will produce. There are plenty of good genuine covers and stamps available on the open market without sullying your collection with rubbish from these scammers.
Posted by David Miller at Monday, August 01, 2011

I find these covers interesting.. and have downloaded images of them over the years I have been on eBay.. Not being from England, I had no idea these were fake.. since I am not a collector of stamps, the covers really don't mean anything to me.. but the design is cool, and they had one for not only generals, but also Bands and corps anniversaries..

That being said, there are some options here.. report the seller to eBay for counterfeiting. that will get them banned from eBay.. Then, they could also be reported to the Royal Mail. [These thoughts may have already crossed your mind, and you may have already placed these actions into motion.]

They could be sold in sets.. even trade might stock them.. after all.. it would be a cool way to get kids into learning Army history..

Thanks for the comment Eric. I have several times reported these covers to Ebay but they have failed to take any action. I guess philately is not their strong point!

I have also spoken to Royal Mail who confimed that the postmark was a fake. I think the reason that they have not taken things further is that the covers appear to be produced in Australia.

If these are to be sold by companies or individuals then so be it, but let those who are selling them be honest about these covers and not try to sell them as something they are not.

Like the idea of Salvation Army Trading Cards very much. Will have to look further at the possibilities of producing a set.