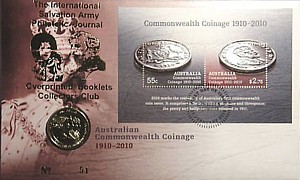 I was sent a link to the cover pictured left by a friend of mine in Australia. As you can see it is an overprint on the Australian Commonwealth Coinage 1910-2010 FDC. I have ascertained that the Salvation Army images were added to the existing FDC. That is they do not form part of the original cover. It therefore seems reasonable to assume that the SA images were added in order to increase the value of the cover and to make it of interest to SA collectors.

My personal view is that all the overprinting has achieved is to deface the original cover. Furthermore the addition of the SA images most certainly does not result in an SA related cover. The production of such items fills me with horror as theoretically it is possible to overprint any cover in this manner in order to produce a supposed SA related item. The mind boggles!

I wonder too about the knowledge of whoever overprinted these covers as they claim that the images show the SA Founders. Upon close inspection the images are actually of William Booth and his daughter Evangeline. Whoops!

Is this cover a deliberate attempt to deceive? Probably not. It is not however an original FDC and I am sure that there are collectors who will be deceived into thinking that this cover is totally original.

To produce an original SA cover is not that difficult. All that is required is a purpose and a little imagination. In my humble opinion the production of covers such as the one below can do SA philately nothing but harm. 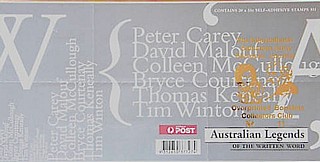 The booklet left has been overprinted in a similar manner. Although overprinting Australia Post booklets in this way seems quite common in Australia, it is likely that the same person is responsible for all the overprinted booklets I have seen.
After checking retails with Royal Mail I can confirm that such a practice is illegal in the UK as it is against the law to deface any Royal Mail product, let alone then offer that product for sale at a premium above face value. I have attempted to get a reply from Australia Post as to the legality of such overprints in Australia, but as yet I have not received a reply.
It would seem to me that it is unlikely that Australia Post would approve of these overprints or that those overprinting these booklets have sought official permission to do so. It may be that the producers are batting on a very sticky wicket when it comes to these booklets.
The purpose again appears to be to try to add value to the booklets by overprinting them with totally unrelated images. Here again the possibility that collectors will be deceived, albeit not deliberately, definitely exists.
So are these overprinted items collectable? I suppose that only the individual collector can answer that question. My view is that while they may be of some interest as novelty items, paying over £30 for a defaced cover or over £16 for a defaced booklet containing barely £6 worth of stamps is certainly not my idea of collectable.
New and original SA philatelic items are always welcomed by collectors. If required I can help with images, design, production, promotion and even sales. I will not however become involved with items such as these which to my mind are at best of questionable monetary value and, deliberately or not, are likely to deceive at least some collectors.
Posted by David Miller at Wednesday, August 03, 2011

I THINK SALVATIONIST COLLECTORS SHOULD BYCOTT THESE OVERPRINTS.