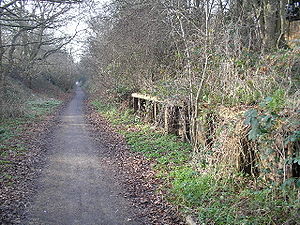 There were several early proposals to provide St. Albans with a rail service and on 4th August 1853 the LNWR received parliamentary approval to construct a line from Watford; the single track branch opening on 4th May 1858. In 1861 the GNR lent its support to a proposal to build a branch line from Hatfield in order to attract some of the lucrative commuter revenue. Authority was obtained on 30 June 1862 and the line was built by the Hatfield & St. Albans Railway with the support of the GNR. The branch was opened on 16th October 1865 and eventually absorbed into the GNR on 1st November 1883.
There was initially only one station at St. Albans (later named St. Albans London Road) with further intermediate stations opening at Srnallford in 1866, Sanders Siding (later Salvation Army Halt) in 1897, Hill End in 1899, East Hyde in 1910 and Lemsford Road in 1942.
The Hatfield - St. Albans branch was an early casualty under British Railways, closing throughout to passengers on 1st October 1951; freight traffic lingered into the 1960's.
Salvation Army Halt: On the southern outskirts of St. Albans a private business of orchid growing was established by Messrs. Sander & Sons. Their greenhouses were linked by a siding for the dispatch of orchids to market. The siding was also later used for the carriage of straw hats from Luton to London. A sleeper built platform halt was built for the use of Sander's staff This was later also used by personnel from the Salvation Army's Campfield printing works. From the siding, Salvation Army periodicals were sent in large quantities for distribution around the world.
The station was opened as a Sanders Sidings as a private non time tabled halt by 1st November 1897 first appearing in a public timetable on 8th July 1929. It last appeared in the public timetable in September 1942 although it remained in use until the closure of the fine in 195 1. The siding remained in use until December 1964.
Posted by David Miller at Thursday, August 18, 2011